Our “designed foods” take many forms, principally our Designer Food Products™. An example in poultry is that in the West, many markets prefer chicken breast, so the emphasis in production is toward producing large birds with large amounts of white meat. In the Middle East, the preference is for flavor and a smaller bird is desired that can be cooked whole. In the East, the chickenfootis a delicacy, so production takes into consideration the depth of the pad in the foot.

Chicken is the most common type of poultry in the world. Estimates are around (19) nineteen billion chickens on Earth today, making them outnumber humans more than two to one. Chickens have become prevalent throughout the cuisine of cultures around the world, and their meat has been variously adapted to regional tastes. Control of the entire production/delivery process extends to all products provided by EnhancedExchange. Therefore, the company has the capacity to design any product desired by our customers, thereby, offering a full array of chicken products including free-range, halal, and organic. Because of our emphasis on product flavor, we specialize in production systems that create robust flavors in our products such as free-range and organic chicken.

The different chicken parts that we supply are: Raw chicken maintains it’s quality longer in the freezer, as moisture is lost during cooking. There is little change in the nutrient value of chicken during freezer storage. For optimal quality, however, maximal storage time in the freezer of (12) twelve months is recommended for an uncooked whole chicken, (9) nine months for uncooked chicken parts, (3 to 4) three to four months for uncooked chicken giblets, and (4) four months for cooked chicken. Also, because chicken is especially susceptible to bacterial contamination such as salmonella, EnhancedExchange carefully freezes chicken before storage or shipment to assure the products are safe for consumption. EnhancedExchange guarantees food safety on all products and is incompliant with poultry industry requirements.

Lamb, hogget, and mutton are the meat of domestic sheep at different ages which our customers recognize that EnhancedExchange provides the different sheep meats per region. In general, EnhancedExchange recognizes in serving its customers that a sheep in its first year is called a lamb, and its meat is also called lamb. The meat of a juvenile sheep older than one year is hogget; outside the United States, this is also a term for the living animal. The meat of an adult sheep is mutton, a term only used for the meat, not the living animals. In the Indian subcontinent, the term mutton is also used to refer to goat meat. Lamb is the most expensive of the three types, and in recent decades sheep meat is increasingly only retailed as “lamb”, sometimes stretching the accepted distinctions. In Australia, the term prime lamb is often used to refer to lambs raised for meat. Other languages, for example, French, Spanish, Italian and Arabic, make similar, or even more detailed, distinctions between sheep meat by age and sometimes by sex and diet, though these languages do not always use different words to refer to the animal and its meat for example, lechazo in Spanish refers to meat from milk-fed lambs. In the United States the terms “mutton” and “hogget” are uncommon. Federal statutes and regulations dealing with food products labeling in the United States permit all sheep products to be marketed as “lamb”.

Sheep products less than (12-14) twelve to fourteen months old can be labeled “prime lamb” or “choice lamb” and all other sheep meat can be labeled simply as “lamb.” The definitions in use for lamb, hogget, and mutton vary considerably between countries. Younger lambs are smaller and are tender. Mutton is meat from a sheep over two years old and has less tender flesh. In general, the darker the color is of the meat, the older the animal. Baby lamb meat will be pale pink, while regular lamb is pinkish red. The meat of a lamb is taken from the animal between one month and one year old, with a carcass weight of between (5.5) five point five and (30 kgs) thirty kilograms (12 and 66 lbs) twelve and sixty six pounds. This meat is generally tender, more so than that of older sheep and appears more often on tables in some Western countries. Hogget and mutton have a stronger flavor than lamb because they contain a higher concentration of species-characteristic fatty acids and are preferential by some. Mutton and hogget also tend to be tougher than lamb (because of connective tissue maturation) and are therefore better suited to casserole-style cooking, as in Lancashire hotpot, for example. Lamb is often sorted into (3) three distinct kinds of meat: forequarter, loin, and hindquarter. The forequarter includes the neck, shoulder, front legs, and the ribs up to the shoulder blade. The hindquarter includes the rear legs and hip. The loin includes the ribs between the two.

Primal Cuts: Lamb carcasses and sides are separated into four major cuts called primal’s. They are the FOREQUARTER, LOIN, and HINDQUARTER.

A rabbit breed is a distinct variety created through natural selection or, more often, through selective breeding for specific characteristics, including size, fur (length, quality, or color), feed conversion ratio, climate adaptability, or temperament. The only rabbit known by EnhancedExchange to be widely domesticated is the European rabbit, which has been extensively domesticated for food or as a pet. Domesticated rabbits have mostly been bred to be much larger than wild rabbits, though selective breeding has produced a range of sizes from “dwarf” to “giant”, which are kept as food animals and pets across the world. They have as much color variation among themselves as other livestock and pet animals. Their fur is prized for its softness; for example, Angora rabbits are raised for their long, soft fur, which is often spun into yarn. In 2018 there were more than (300) three hundred breeds of domestic rabbits around the world. The global diversity of breeds reflects the breadth of the rabbit’s unique qualities. Rabbit meat is a feature of Moroccan cuisine, where it is cooked in a tajine with raisins and grilled almonds added a few minutes before serving. In China, rabbit meat is particularly popular in Sichuan cuisine, with its stewed rabbit, spicy diced rabbit, BBQ style rabbit, and even spicy rabbit heads. Rabbit meat is comparatively unpopular elsewhere in the Asia-Pacific. In addition to their meat, rabbits are used for their wool, fur, and pelts.

Turkey meat, commonly referred to as just turkey, is the meat from turkeys, typically domesticated turkeys. It is a popular poultry product, especially in North America, where it is traditionally consumed as part of culturally significant events such as Thanksgiving and Christmas, as well as in standard cuisine. Turkeys are sold sliced and ground, as well as “whole” in a manner similar to chicken with the head, feet, and feathers removed. Frozen whole turkeys remain popular. Sliced turkey is frequently used as sandwich meat or served as cold cuts; in some cases where recipes call for chicken, it can be used as a substitute. Ground turkey is sold and frequently marketed as a healthy alternative to ground beef. Without careful preparation, cooked turkey is usually considered to end up less moist than other poultry meats such as chicken or duck. Wild turkeys while technically the same species as domesticated turkeys; have a very different taste from farm-raised turkeys. Almost all of the meat is “dark” (including the breast) with a more intense flavor. The flavor can also vary seasonally with changes in available forage, often leaving wild turkey meat with a gamier flavor in late summer, due to the greater number of insects in its diet over the preceding months. A wild turkey that has fed predominantly on grass and grain has a milder flavor. Older heritage breeds also differ in flavor.

Veal is the meat of calves, in contrast to the beef from older cattle. A calf (plural, calves) is the young of domestic cattle. Calves are reared to become adult cattle, or are slaughtered for their meat, called veal, and for their calfskin. Veal is a nutritious and nutrient-rich meat that is produced from the male offspring of dairy cows. Dairy cows give birth once a year in order to continue producing milk. While female offspring serve as cows to the milking herd, male calves are raised, marketed and sold as either veal or beef. Generally, veal is more expensive than beef from older cattle. Milk-fed, special-fed and formula-fed are names given to nutritionally balanced milk protein-based diets that we use in veal farming. These diets contain iron and (40) forty other essential nutrients including proteins, amino acids, carbohydrates, fats, vitamins and minerals. Conceptually, the milk-based diet is very similar to infant formula. Veal is an important ingredient in Italian, French and other Mediterranean cuisines. Veal is often in the form of cutlets, such as the Italian cotoletta or the famous German/Austrian dish Wiener Schnitzel. Some classic French veal dishes include fried escalope’s, fried veal Grenadines, stuffed paupiettes, roast joints, blanquettes and more. Because veal is lower in fat than many meats, care must be taken in preparation to ensure that it does not become tough. Veal is often coated in preparation for frying or eaten with a sauce. Veal Parmigiana is a common Italian-American dish made with breaded veal cutlets.

We also offer veal divided into primal cuts, sub-primal cuts and portion control cuts, as well as offal and others.

Primal Cuts: Veal carcasses and sides are separated into four major cuts called primal’s. They are the LEG, LOIN, RACK, and CHUCK. 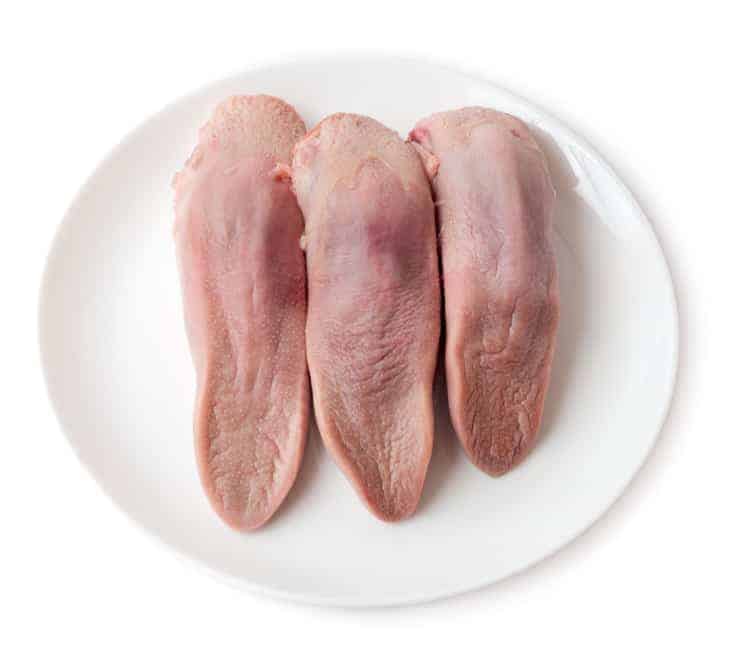